The Most Versatile Appaloosa Award

In nearly every discipline across the world you will find an Appaloosa excelling and setting records. From Olympic level dressage and show jumping to reining and endurance, the Appaloosa is the horse for all seasons. Their eager-to-please attitudes and gentle dispositions make them a pleasure to work with in any sphere and their versatility is second to none. They were bred by the Nez Perce Tribe to be versatile and this characteristic still rings true hundreds of years later. An Appaloosa is a safe child’s mount one day and a focused competitor the next. It is not rare to see an Appaloosa competing in a three day event one day and hacking across open countryside with a complete beginner on his back the next. Their forgiving, willing and kind natures make them the ideal versatile breed for both professional and novice riders. Those who ride Appaloosas will tell you there is little they can’t do and not much they won’t. They are bold but sensible and sound enough to last year after year. The ability to think for themselves and take care of their rider means they are not only a valued member of the family but an irreplaceable mount for the owner too.

Appaloosas are commonly seen successfully competing alongside other breeds in county level showing, affiliated show jumping and dressage, racing, endurance and eventing amongst others. In America the Appaloosa is popular as a stock and pleasure horse and is regularly used in the western riding disciplines such as cutting, trail, western pleasure, barrel racing and reining. Western disciplines are growing in popularity in the UK and the Appaloosa breed is particularly suitable to these disciplines. The UK Appaloosas demonstrate their ultimate versatility by participating in both Western and English disciplines on a regular basis.

The ApHC UK recognises the great achievements and versatility of the breed and has created an award for the most versatile Appaloosa. Each year, Appaloosa riders get the chance to compete for The Most Versatile Appaloosa award at the Appaloosa Horse Club UK annual breed show. In order to qualify the horse and rider combination must compete in any two open in-hand classes, an English ridden class, a dressage test, a show jumping class, a novice walk/jog class and a novice horse trail class. Similarly, a western trained horse must compete in any two open halter classes, a dressage test, a restricted show jumping class, a pleasure class, a trail class and a horsemanship class. Points are awarded according to placing and number of entries in the class. This tests the true versatility of the horse and each year there are some great displays of skill, patience and flexibility.

ApHC UK members are invited to participate in the Performance Award Scheme whereby they keep a record of their achievements at shows of all kinds (Dressage, Show jumping, Eventing, Western Riding, In-hand showing etc). Members are awarded points depending on where they are placed and the entry numbers in the class. These points are logged over the year and a Hi Points Trophy is awarded to the adult member and youth member with the most points. In addition members can earn ROM (Records of Merit) that are awarded when the member achieves a certain number of points in any one discipline.

The ApHC UK holds a national show once a year and a number of regional shows around the country so that members can get together and compete against other Appaloosas. It really is a colourful and unique experience to see so many varied and striking Appaloosas together in one place. It is also a time to meet up with old friends and a chance to catch up and socialise in a relaxed and friendly atmosphere. 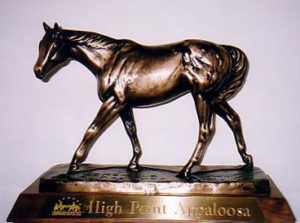 It’s very easy to enter the Performance Award Scheme and it’s absolutely free, you have nothing to lose and everything to gain and a beautiful bronze trophy to aim for. All you need to do is download as many record log sheets as you require and record your successes per show listing details such as horse and rider combination, class description, your placing and how many other competitors came forward for the class. One sheet per horse per show. Just remember to take spare sheets with you to every show you attend and ask the show secretary to sign the bottom (no signature, no points) and watch those points add up. Bonus points are awarded for ApHC UK, Regional and National Shows.

The record log sheet acts on the same lines as for the Records of Merit issued by the ApHC, that is you will be rewarded points for the placing achieved, depending on the entry numbers in the class concerned. The log will run each year from 1st January to 31st December. At the end of the Performance Year the Youth and the Adult with the most points will win an ApHC UK Performance Hi Point Award Trophy.

Records sheets can be downloaded from the Documents & Forms page.

We have such beautiful horses to ride so why not log those hours in the saddle by entering the Saddle Log Programme. It is designed for those ApHC UK Members that do not compete at shows but are able to compete for an award by just simply enjoying the countryside whilst aboard their beloved Appaloosa.

All you have to do is genuinely record your hours spent in the saddle whilst hacking out or taking part in a pleasure ride. Schooling sessions, competitions and using your horse for something to sit-on do not count towards hours in the saddle. You must be actively riding out on bridleways, country lanes, other roads and tracks and across the countryside in general. Points will be awarded for the number of hours spent in the saddle.

Saddle Log record sheets can be downloaded for you to enter your time spent in the saddle. Complete as many forms as you need and at the end of the Saddle Log year (1st January – 31st December) send them off to Lisa for processing and the results and results will be announced at the AGM in April together with presentation of awards.

Record sheets can be downloaded from the Documents & Forms page